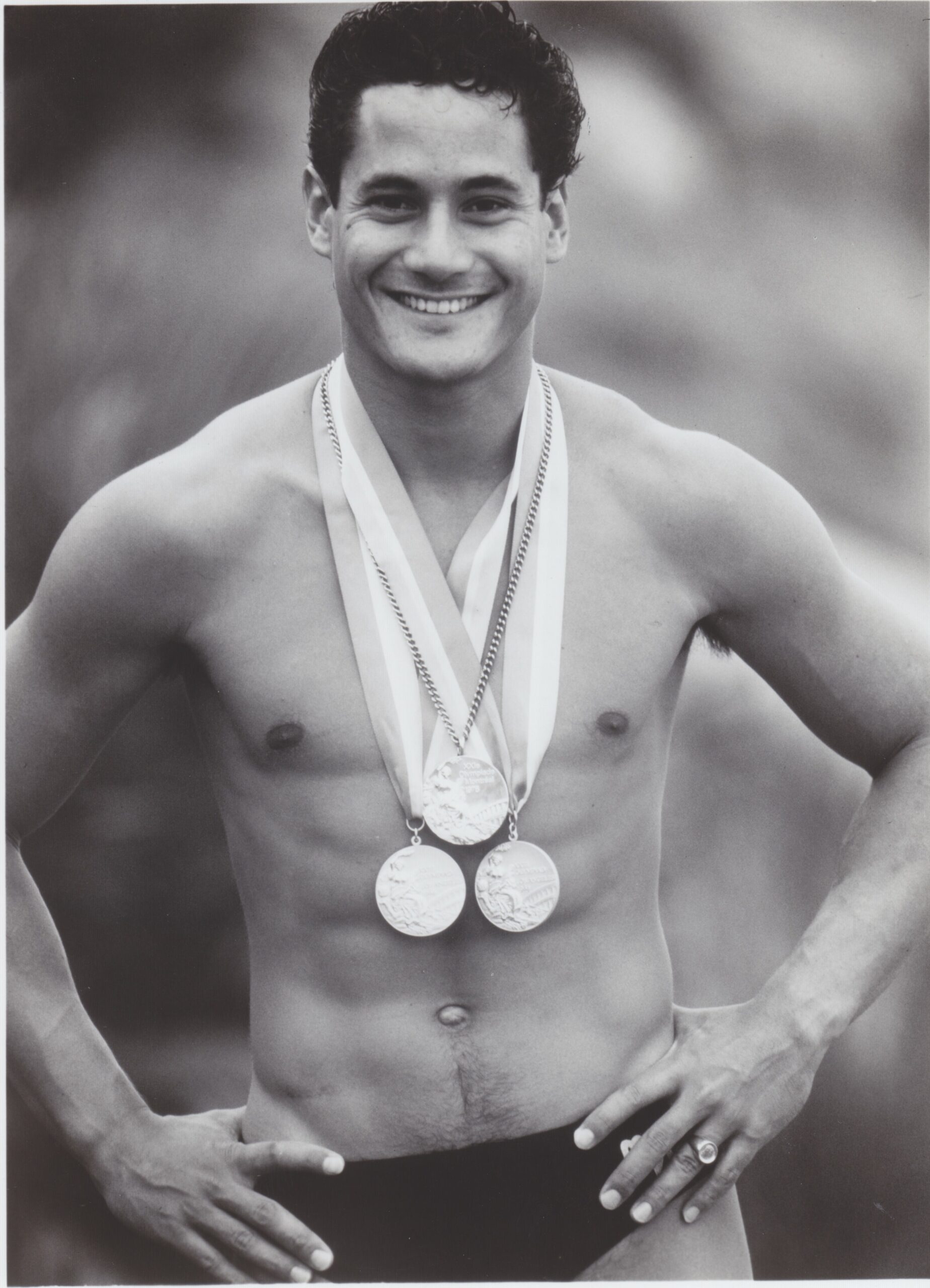 Considered the greatest diver in history, Greg Louganis is the only male to win gold medals on both 3 meter springboard and 10 meter platform in consecutive Olympic Games (1984, 1988).

A trained actor, dancer, model and spokesman, Greg’s wide repertoire of skills keeps him in demand and in the public eye. Currently he is the Sports Director for Red Bull Cliff Diving.

As the undisputed GOAT of mindset, Greg shares his knowledge and wisdom through his meditation and mindfulness course, as well as through his books, interviews and speaking engagements.

Greg Louganis is simply the greatest diver in history. Across the globe, billions who watched either the 1984 or 1988 Olympics were enthralled by the poetry that was Greg Louganis: the beauty and power of his diving captured the world.

With a total of 5 Olympic medals, 5 World Championship titles and 47 national titles, more than any person in U.S. history, his records remain unbroken.

Today, as a coach, speaker, author, actor, activist and humanitarian he continues his tradition of excellence.

Scroll down for full bio

Greg Louganis was adopted at 9 months by Frances and Peter Louganis, who lived in Lemon Grove, CA, just outside of San Diego. Teased and bullied as a child for the dark skin he inherited from his Samoan father and for his learning “differences,” he turned to what he could do well: sport. His first love was gymnastics and by nine years old, he was a “seasoned performer on the local talent show and convalescent-home circuit,” (Breaking the Surface).

In 1969, Greg’s mom took him to diving practice to keep him from breaking his neck doing stunts off his backyard diving board. He wasn’t crazy about the sport at first, but his interest grew when he discovered he was quite good at it.

At the age of 11, Greg entered the national Junior Olympics. During the tough competition, Greg’s mom took him outside to find out why he was struggling. He told her he was afraid of letting everyone down. She reassured him, saying that he would always be her son and no matter what, she would always love him. He went back to the pool and moved from twelfth place to tie for second. Those words stayed with him and helped him through every competition in his career.

Five years later, Greg was working with diving legend Dr. Sammy Lee. Dr. Lee helped teach Greg to be a fighter, lessons that would be invaluable later in life. At sixteen years old, Greg qualified for the 1976 Montreal Olympic Games, where he won an Olympic silver medal on 10m platform. Four years later, in peak form, Greg was one of the many athletes to suffer from the U.S. boycott of the 1980 Olympic Games. It was widely expected that he would win gold medals in Moscow.

In 1978, Greg entered the University of Miami on a full diving scholarship and studied theater as part of the BFA program. In 1980, in order to dive with coach Ron O’Brien, he transferred to UC Irvine, also on an athletic scholarship. He graduated in 1983 with a major in drama and a minor in dance. As part of the drama department, Greg was dance captain and a lead player in a production of Pippin and assistant choreographer for The Gondoliers.

At the Los Angeles Olympic Games in 1984, Greg became the third man in the history of the sport to win gold medals in both springboard and platform, the first since Pete Desjardins in 1928. Following the Olympics, Greg’s life was full of appearances, exhibitions, speaking engagements, commercials and modeling. But his time to celebrate was brief; soon he was training again for what would be one of his greatest challenges.

By 1988, Greg’s physique had changed a little and he was twice as old as his competition on the Chinese diving team. He had learned he was HIV-positive and was struggling with the physical and emotional toll of his status. Many people will remember the infamous scene during the diving preliminary competition at the Seoul Olympics when Greg, comfortably in first place, performed a reverse two and ½ pike and hit his head on the diving board. For most divers, an accident that severe would be competition ending, if not career ending. But not for Greg… the consummate competitor… the consummate performer.

Despite the concussion, the four stitches, the pain, and his overwhelming fear of spreading HIV, Greg continued the competition and qualified for the finals in third place. He came back in the finals to win gold in the men’s three-meter springboard event. On the ten-meter platform, he was neck and neck with his Chinese opponent, 14-year-old Xiong Ni, throughout the competition. The fight for gold came down to the last dive. Xiong Ni’s was near perfection, but it wasn’t enough. By a difference of only 1.14 points, Greg won gold and earned the distinction of being the only man ever to win gold medals in both springboard and platform in two consecutive Olympics.

Coming out and HIV

In February 1995, Greg shocked the world when, courageously, he announced on Barbara Walter’s 20/20 and The Oprah Winfrey Show that he is gay and HIV-positive. The interviews were in advance of the release of his autobiography Breaking the Surface (co-written with Eric Marcus), which detailed the struggles he’d faced on his journey to gold medal glory.

Freed from the secrets he’d carried through his life, Greg pursued his other great loves – animals and acting. He began training and showing dogs, co-authoring the book, For the Life of Your Dog, with Betsy Sikora Siino in 1999. He has appeared in eight films, including narrating a dramatization of Breaking the Surface, starring Mario Lopez. He has appeared in numerous television shows and been interviewed countless times.

Champion for all time

In the spring of 2012, Greg is living a busy life filling many roles, including mentoring the 2012 U.S. Olympic diving team, acting as Vice President for the U.S. Olympian Association, traveling the world as a judge for the Red Bull Cliff Diving Tour, running training camps and authoring a new book, both on creative learning and peak performance, and of course, modeling and acting. But perhaps closest to his heart is the work he does to raise awareness and support for various philanthropic organizations dealing with animals, diversity, learning differences and HIV/AIDS.